Cinnamon Infusion as a Powerful Antioxidant

Cinnamon Infusion as a Powerful Antioxidant 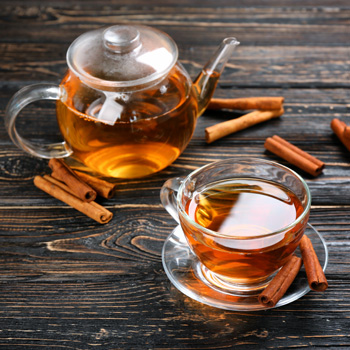 Ground cinnamon is commonly sprinkled on hot chocolate and latte due to its sweetness and aromatic flavour. But did you know for thousands of years this spice has been used by people all over the world as an ingredient in a wide variety of cuisines, pastries, teas and traditional foods? Cinnamon is obtained from the inner bark of several evergreen trees and shrubs belonging to the laurel family species, from the genus Cinnamomum. These are normally found in regions of southern China, India and South East Asia. Although known as one of the world’s best loved spices, extracts from the bark of the cinnamon tree have also been traditionally used as medicine throughout the world.

Many cultures believe it has the ability to help detoxify the body, lower blood sugar levels, promote weight loss, regulate menstruation and help fight indigestion. Cinnamon spice is also used by some as a treatment for diarrhea, bloating and as an expectorant to help relieve respiratory conditions. It has been called a 'wonder spice' due to its wide range of other health benefits, including antibacterial, antifungal, anti-diabetic properties, immunity-boosting and potential cancer and heart disease-preventing abilities.

Cinnamon’s health benefits are attributed to its content of specific types of antioxidants, including polyphenols, phenolic acid and flavonoids. These varieties of protective antioxidants reduce free radical damage and slow the ageing process as they work to fight oxidative stress in the body and aid in the prevention of chronic disease. Thus antioxidants have been considered the most important drivers in the progress and existence of humans.

To date, researchers have identified at least 41 different protective compounds found within cinnamon. According to the ORAC scale, which is used to measure the concentration of antioxidants in different foods, cinnamon ranks number 7 of all foods, herbs and spices. And in a study that compared the antioxidant activity of 26 spices, cinnamon was the clear winner, even outranking 'superfoods' like garlic and oregano. In fact, it is so powerful that it can be used as a natural food preservative.

This exotic spice is a rich source of magnesium, iron, calcium, fiber, and vitamins C and B1. In addition, its antimicrobial and mouth refreshing effects have been found to help prevent tooth decay.

Cinnamon spice can be added to your daily diet in variety of ways. One of the best ways to consume cinnamon is in the form of an infusion as it is easier for the digestive system to absorb cinnamaldehyde and all its bioactive components in shorter amount of time. Simply steep a cinnamon stick or infuse the ground powder in hot water for 10 to 15 minutes. This way, the spice extracts can directly be consumed in a sweet and spicy healthy beverage. Ahmad Tea has a variety of blends containing cinnamon including Cinnamon Haze and Chai Spice black tea, Rooibos & Cinnamon  and Winter Charm infusions.

As with most foods, excessive intake of cinnamon can be dangerous. The presence of a compound called coumarin can cause symptoms like difficulty in breathing, mouth sores and low blood sugar. Therefore, it’s best to keep intake in moderation and pair with a healthy diet and active lifestyle to maximize the potential health benefits.

Cinnamon from Wikipedia; The free encyclopedia. Retrieved (18 December 2018) from https://en.wikipedia.org/wiki/Cinnamon.